On Friday April 20, we, the volunteers from the civic association Katarínka, received at the Bratislava Castle two nominations and one of the two main ICOMOS Slovakia awards – Heritage for the Future 2017. The national committee ICOMOS Slovakia awarded the main prize in the category Extraordinary Activity Leading to Increasing Awareness of the Monuments Fund Values and Strengthening the Public Awareness of These Values to the hundreds of volunteers from the Katarínka project – for saving the ruins of the Monastery and Church of St. Catherine.

At the ICOMOS award ceremony at the Bratislava Castle, five volunteers from Katarínka, representing various generations – from the founders of the activities from 1994 up to the current hard workers and leaders of the project – received not only the main prize, but also a nomination in the category Renewal of a Monument by Using the Traditional Construction Technologies for their project Reconstruction of the Church Tower of the Franciscan Monastery Katarínka. We see the award and the nomination as evaluation of our long-term selfless work to save the precious and large monument – Monastery of St. Catherine of Alexandria located near Dechtice and Naháč, where hundreds of volunteers every year move to the history without mobile phones, internet, or electricity and this year for the 24th time they will work on conservation and saving of Katarínka. Tower reconstruction, which was also nominated for an award, allowed in 2017 to make the tower accessible to visitors as a sightseeing tower. The floors and stairs in the tower were faithfully reconstructed from the hand-sculpted beams using the traditional techniques. 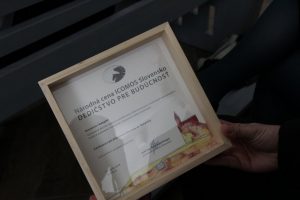 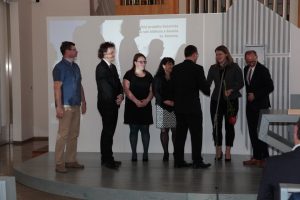 The complete press release (in Slovak) »»