The St Catherine’s Monastery preservation project is intended for young volunteers aged from 17 from all over Slovakia. The four two-week summer camps in July and August take place every year. This project is planned to last till the completion of the neglected site’s conservation.

KATARÍNKA n.g.o. (a civic association) in cooperation with the Association of the Christian Youth Communities (ZKSM) – an apolitical youth organization based on smaller Christian communities all over Slovakia. ZKSM organizes various events such as Akadem – gatherings of academic youth, Dubova Colonorum and Bzovík – summer preservation camps, Muráň-Levoča pilgrimage etc..

St Catherine’s Monastery preservation project is organized by Katarínka n.g.o. and ZKSM not only for young Christians, but for all young volunteers from Slovakia, in close collaboration with the Preservation Office in Trnava, the Dechtice municipal authority, the State Forest Enterprise “Forests of the Slovak Republic” in Smolenice, the Regional Studies Museum in Hlohovec, the Western Slovakian Museum in Trnava (at the beginning also with Archeological Institute of the Slovak Academy of Sciences in Nitra), and the Franciscan Order.

We certainly do not intend to rebuild the monastery, but to preserve it in its present condition for two reasons:

History of the project

During the project run since 1995, dozens of young volunteers have been trained every year as new organizers of the camps. The project has also been presented in mass media, at some youth gatherings and, last but not least, at the regular expert exhibition Nostalgia Expo as well as at conferences on monument preservation.

Our plans for the future

What is the “Order of St. Catherine – the order of the preservationists”? 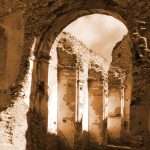 Katarínka as a project is supported by these 4 pillars:

These pillars also form the vision of the Katarínka project. We balance the pillars and try not to promote any pillar. It is not just about work, but without work on Katarínka, the goal of the Katarinka project would not make sense.

The camp is situated near the ruin, beyond the Nature Reserve of Katarínka.
Location of the camp:

Map and other information about the location: Where is Katarinka?