The Katarínka project aimed at restoration and conservation of the St. Catherine of Alexandria Church and Monastery ruins nearby Trnava celebrates 25 years. During these years, 1830 volunteers took turns at Katarínka and helped during the two-week camps to rescue the ruins. The project aims not only to restore the cultural monument, but also to form young people by giving them opportunity to reasonably spend their free time in summer. 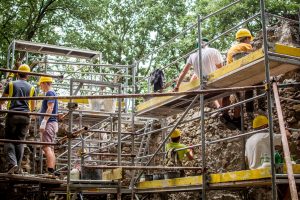 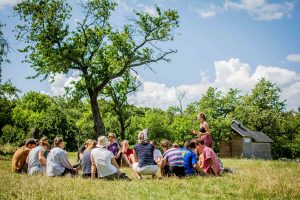 In 1994, a group of students went hiking and visited not only the nearby Dobrá Voda Castle ruins, but also Katarínka. The abandoned and desolate place made an impression on the 21-year-old Peter Herceg, who decided to take steps to rescue this place. His friends also liked the idea and supported it and a year later, the first volunteers came to the St. Catherine Church and Monastery.

Peter Herceg, the founder of the Katarínka project, said these words at the 25th anniversary of the project:

“It is a great miracle for me that we have been working to rescue Katarínka for 25 years and even after 25 years there are volunteers willing to help. Hundreds of volunteers and several generations have been involved and today we can see great results. For example, the church tower underwent reconstruction and was awarded the Monument of the Year Prize for 2017. The greatest satisfaction for me are almost 2,000 volunteers who left part of their lives in the walls of Katarínka.”

In the first years of the project existence, volunteers cleared the church interior, built the camp, and improved the surroundings. 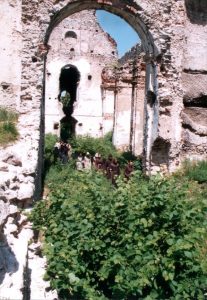 In the following years, other works gradually started: masoning, filling of cracks, several tons of lime were slaked, and the first archaeologic works started. In 2010, volunteers started with reconstruction of the hollow church tower. Hand-carved oak beams were added and in 2017 the tower reconstruction was completed and after the final inspection opened for tourists. In 2018, the biggest crypt in the church nave, which had been archaeologically researched, was reconstructed.

This year (2019), volunteers finished the archaeologic research in the church nave: coins were found, as well as the original floor tiling and the foundation of a small altar. The southeast part of monastery was being conserved: hand-carved oak beams were added and the enclosure wall of the monastery garden was completely conserved. In the next working season, the rescue works on the monastery and the archaeologic research will continue. During the summer season, volunteers guided thousands of visitors, as trips to Katarínka have become increasingly popular in the last years and the reconstructed tower attracts many visitors.

During one weekend in November, volunteers celebrated 25 years of the project in Dechtice. The Katarínka project is organized by the Association of Christian Youth Communities and Katarínka NGO with cooperation of Dechtice municipal authority and the Franciscan Order. All generations of volunteers, their friends and supporters participated in the celebration. The celebration included a thanksgiving holy mass in the St. Catherine parish church, cultural program, presentation of 25 years of work, videos, awarding of volunteers, and also a party for almost 250 participants until early morning hours. 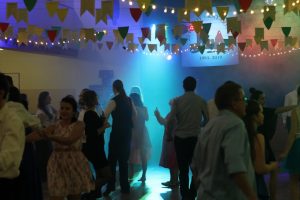